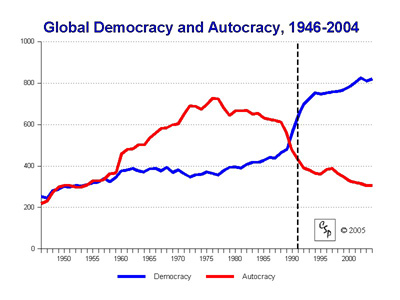 What is the democratic peace?

It is the web of factual propositions that:

Putting all this together, democracy is a method of nonviolence. And therefore, the democratic peace.

२६ जुलैला जपानला सांगण्यात आले की तुम्ही बिनशर्त शरणागती पत्करा, पण त्यांनी दाद दिली नाही. (Potsdam Declaration, defining "Unconditional Surrender")
त्यानंतर पहिला अणुबाँब ६ ऑगस्टला टाकूनही जपानने शरणागती पत्करली नाही.
The Japanese Army and Navy had their own independent atomic-bomb programs and therefore the Japanese understood enough to know how very difficult building it would be. Therefore, many Japanese and in particular the military members of the government refused to believe the United States had built an atomic bomb, and the Japanese military ordered their own independent tests to determine the cause of Hiroshima's destruction. Admiral Soemu Toyoda, the Chief of the Naval General Staff, argued that even if the United States had made one, they could not have many more. American strategists, having anticipated a reaction like Toyoda's, planned to drop a second bomb shortly after the first, to convince the Japanese that the U.S. had a large supply

Following the atomic bombing of Nagasaki, Truman issued another statement:

The British, Chinese, and United States Governments have given the Japanese people adequate warning of what is in store for them. We have laid down the general terms on which they can surrender. Our warning went unheeded; our terms were rejected. Since then the Japanese have seen what our atomic bomb can do. They can foresee what it will do in the future.

The world will note that the first atomic bomb was dropped on Hiroshima, a military base. That was because we wished in this first attack to avoid, insofar as possible, the killing of civilians. But that attack is only a warning of things to come. If Japan does not surrender, bombs will have to be dropped on her war industries and, unfortunately, thousands of civilian lives will be lost. I urge Japanese civilians to leave industrial cities immediately, and save themselves from destruction.

I realize the tragic significance of the atomic bomb.

Its production and its use were not lightly undertaken by this Government. But we knew that our enemies were on the search for it. We know now how close they were to finding it. And we knew the disaster which would come to this Nation, and to all peace-loving nations, to all civilization, if they had found it first.

That is why we felt compelled to undertake the long and uncertain and costly labor of discovery and production.

We won the race of discovery against the Germans.

We shall continue to use it until we completely destroy Japan's power to make war. Only a Japanese surrender will stop us.

ऑगस्ट १३-१४
Via Ultra intercepts, the Allies also detected increased diplomatic and military traffic, which was taken as evidence that the Japanese were preparing an "all-out banzai attack." President Truman ordered a resumption of attacks against Japan at maximum intensity "so as to impress Japanese officials that we mean business and are serious in getting them to accept our peace proposals without delay." The United States Third Fleet began shelling the Japanese coast. In the largest bombing raid of the Pacific War, more than 400 B-29s attacked Japan during daylight on August 14, and more than 300 that night.

At the suggestion of American psychological operations experts, B-29s spent August 13 dropping leaflets over Japan, describing the Japanese offer of surrender and the Allied response. The leaflets had a profound effect on the Japanese decision-making process.

In what distant deeps or skies.
Burnt the fire of thine eyes!
On what wings dare he aspire!
What the hand, dare sieze the fire?

And what shoulder, & what art,
Could twist the sinews of thy heart?
And when thy heart began to beat,
What dread hand? & what dread feet?
What the hammer? what the chain,
In what furnace was thy brain?
What the anvil? what dread grasp,
Dare its deadly terrors clasp!

When the stars threw down their spears
And water'd heaven with their tears:
Did he smile his work to see?
Did he who made the Lamb make thee?
Tyger, Tyger burning bright,
In the forests of the night:
What immortal hand or eye,
Dare frame thy fearful symmetry?